Is there a book you’ve read that you think is worthy of being nominated? Get in touch and let us know what you’ve been reading and which books you think would be worthy contenders for these prestigious awards.

Nominations for the 2020 Carnegie and Kate Greenaway Medals are open in September 2020. If you are a CILIP member you may also make individual nominations (one title per Medal) – please see www.carnegiegreenaway.org.uk  for more detail about the Medal criteria and mission for the Awards.

Last weekend saw the return of our Unconference on the Move. After the success of the 2015 event in Manchester, we decided to stick with the ‘on the move’ format and visited three stunning locations in Liverpool’s cultural St George’s Quarter: Central Library; the Walker Art Gallery and the majestic St George’s Hall. All of which were shown in their best light on  what was a beautiful last-gasp-of-summer Saturday.

The aim of the Unconference was to give delegates from across the region the chance to meet, network and talk about topics that matter to them. With that in mind, we started the day by asking delegates to nominate topics for discussion before embarking on a tour of Central Library with our guide, Susan.

Susan showed us some of the building’s most distinguishing features, including the large children’s library, the Picton reading room and the soundproof space for teenagers, complete with games console and PCs (no books in there though, although teenage fiction is situated just outside). The impressive archives space also looked well-used, whilst the roof terrace is always beautiful – I’m beginning to think it’s always sunny in Liverpool as I’ve never visited the library on a day that’s not terrace-worthy yet! 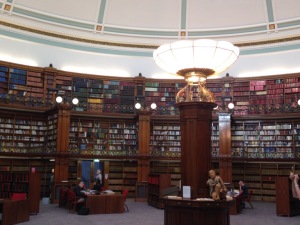 After the tour, we settled down to our first discussion groups of the day. Splitting into two so delegates could choose what most appealed to them, one group discussed digital engagement and interaction with young people; whilst the other focused on the future of school and public library services for children as librarian posts are deleted and libraries are closed.
The digital group discussed the best ways to connect with teenagers and reasons why they might not be digitally engaging with our services as much as we might like – including organisational restrictions (library staff not being allowed to use social media); the platforms we are using (are these the ones where the teenagers are? And do they even want us there?) and the danger of teens tuning out (social media saturation). Suggestions included staff using examples of other organisations where social media is used to good effect to build a business case or even to look to the young people they work with for this (ask them what they want from us digitally then use that as evidence). It was agreed that whatever method of communication is used, the key is to always be authentic as young people can smell desperation through a screen.

With well-documented cuts and changes to delivery models, the second group discussed ways in which library services for children and young people can be promoted and protected. The key finding of this group was “keep shouting your message, it is always new to somebody.” Key initiatives that are good opportunities for libraries to raise their profile were identified, including the Summer Reading Challenge, Code Clubs and the Shelf Help collection for young people.

Following this we then moved on to St George’s Hall where, after a look around this beautiful building, the discussions continued apace. Books were the order of the day this time, with “Moving readers on…Wimpy Kid and beyond” and “Books for older teens, including LGBT+ and mental health themes” the chosen topics.

After lunch and further networking at the Walker Art Gallery, it was back to Central Library for the final part of the day: deciding upon the Northwest regional nominations for the 2017 CILIP Carnegie & Kate Greenaway awards. Committee members championed a selection of books, highlighting how they meet the awards criteria before delegates voted for their favourites. As a result our regional nominations are:

Thank you to all delegates that attended the Unconference this year – we hope you found it as useful and enjoyable as we did.

We’re inviting all the delegates at our Unconference to vote for the 4 books that the Northwest Committee can put forward as our CKG nominations for 2017. Committee members will be championing a shortlist of 6 books for each award and discussing how we think each of the books we’ve selected measures up to the Medal criteria.

We’d really like your votes to count so we’re inviting you to read along with us. Copies of each of the titles will be available on the day but it would make all the difference if you’d had a chance to look at some of the books beforehand and (fingers crossed) felt happy to contribute to our discussions on the day.

Of course if you’re unable to attend our Unconference we’d still love it if you’d take a look at these books – we think they really are among the best books published in the last year and we’d love to know what you made of them too.

Our shortlisted titles are as follows- Happy Reading!

Salt To The Sea – Ruta Sepetys

Green Lizards vs Red Rectangles: A Story About War and Peace – Steve Antony

There Is A Tribe Of Kids – Lane Smith

Much Ado About Shakespeare – Donovan Bixley

We hope that you will be able to join us for this years Unconference where we’ll be ‘On The Move’ taking in the finest literary settings that Manchester has to offer. 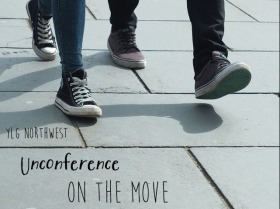 YLGNW Unconference On The Move, June 2015

With visits to The John Rylands Library, The Portico Library and Central Library, this is a fantastic opportunity to visit Manchester’s greatest libraries while discussing and debating issues relating to library provision and reading for children and young people. END_OF_DOCUMENT_TOKEN_TO_BE_REPLACED

YLGNW were proud to host our first Unconference at Liverpool Central Library on Saturday 11th October 2014. The event was attended by approximately 25 people brimming with enthusiasm to talk about issues relating to library provision for children and young people. The day was broken into about six different sessions with delegates themselves coming up with topics for discussion which included “Developing a Whole School Reading Culture”, “Engaging Families”, “Funding” and “Engaging Young People”. The sessions allowed a sharing of tried and tested ideas and best practice by those already working in library settings and some new ideas were also suggested.

The post lunch session was devoted to the Carnegie and Kate Greenaway Awards. The branch’s CKG rep, Kathryn Flagner, gave an outline of what was looked for in nominations for the prizes and how the voting process on the day was going to work. This included the rule that only members of CILIP can vote for these awards.  Although everyone would be asked to vote and the results of CILIP and non CILIP members would be compared, only members’ nominations would go through to the list of books to be considered by national judges. END_OF_DOCUMENT_TOKEN_TO_BE_REPLACED